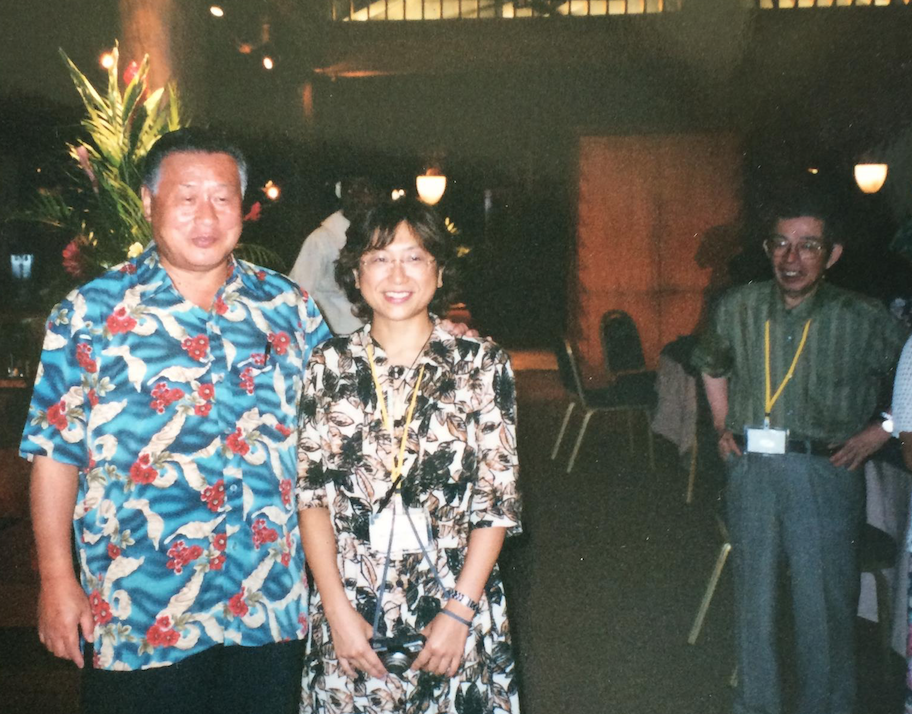 ICT conference held in Fiji as a follow-up to the 2nd Pacific Island Summit (PALM2). Prime Minister Mori and the author. On the right is my  mentor, Professor Akio Watanabe, who has supported the Micronesian Regional Cooperation Framework with me.
A US$15 billion project to support information and communications was the centerpiece of the G8 Summit in 2000 . In particular, the digital divide in developing countries was a major theme.
In 2000, a proposal for a satellite network connecting the Micronesian region had already been formulated, mainly by the University of Hawaii. So, as a follow-up to the PALM2, we held an international conference in Fiji, which was attended by the co-chairs, Prime Minister Mori and President Nakamura of Palau. It was Mr. Tomoharu Washio, who was working at JETRO at the time, who motivated Prime Minister Mori to attend this conference. I was the one who moved President Nakamura.
Mr. Washio decided to make the conference a JICA-JETRO joint venture, saying that PALM should be an all-Japan project. What surprised was Mr. Akio Miyajima, then Director of the Oceania Division of Ministry of Foreign Affairs, because Pacific  Island countries were a minor issue in the MOFA, and it was impossible for the prime minister to move. Moreover, coincidentally I had arranged for President Nakamura to fly on the same plane as Prime Minister Mori, and the two of them were seated next to each other from Japan to Fiji, via Hawaii.
As was the case with USPNet, if you submit a project proposal to the MOFA of Japan, which has no understanding of development issues, information and communication, or the economies of island countries, it will be rejected without evaluation. I asked President Nakamura to make a direct request to Prime Minister Mori.
The ball was thrown to the MOFA. The following year,  JICA conducted its feasibility study on that proposal. It was Akio Miyajima who destroyed it. Even if island kids, youth get an education in Yap, Palau, etc., there is no place to work, and if islanders get sick, they can go to the Philippines or Guam. There is no need for expensive communications on these small islands. There is a scholar who has written an inhumane paper that supports this. He was Taiyo Tsuchiya of Keio University. I can still clearly remember how my guts churned at that time.
This was the reason why ICT was raised as an agenda item at the second Micronesian Presidential Summit in 2002. I forget how I reported the result to Hon. Billy Kuartei. But I did not give up. In fact, at the same time as, or as a precondition for implementing infrastructure, we needed to reform and deregulate the telecommunications regime and regulations. I decided to support policy reform of Micronesia ICT. This was a big deal, like the dismantling of NTT, which had been run as a monopoly. In fact, the Pacific Islands Forum was also formulating an ICT policy reform plan at the time. However, it was almost impossible to bring back to each country a plan to reform the monopolized regime in which the telecommunications companies of the former sovereign countries would operate, i.e., in which there were strong vested interests.
However, as part of the Micronesian Framework for Regional Cooperation, the FSM's Minister of Transport and Communications, Hon. Francis Itimai, took the lead in this effort. Palau and the Marshall Islands were also making their own efforts. In cooperation with the University of Hawaii, I was able to support them as well. At the same time, the U.S. military, the Asian Development Bank, and the World Bank were moving forward with plans to lay submarine communication cables. This is a countermeasure against North Korea's ballistic missiles.

Around 2001. I invited Mr. Miyajima (4th from left), Director of Oceania Division, the Ministry of Foreign Affairs, to a PEACESAT-sponsored conference in Hawaii, hoping to help him understand the issues of information and communication and island nations, but to no avail. But the Micronesian leaders and I did not give up.
From left to right: the author, Professor Masatomo Tanaka/Professor Toshio Kosuge of the University of Electro-Communications, Mr Akio Miyajima  ? President of the College of Micronesia? , Prof. Norman Okamura of the University of Hawaii, Ms. Christina Higa, University of Hawaii.
« ミクロネシア（６）北朝鮮ミサイル攻撃と… ミクロネシア（５）森・ナカムラが動いて… »
プロフィール