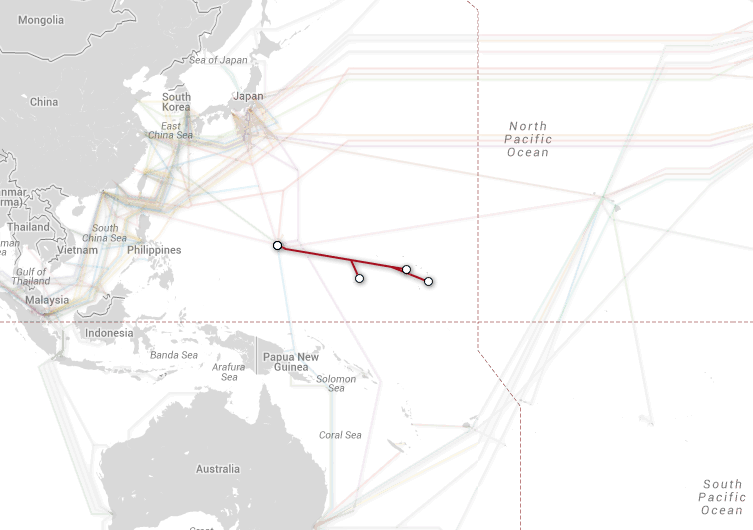 In 2017, Palau and Yap were also connected SEA-US cable
The U.S. military was among the first to grasp Chinese military threat in the Western Pacific. In 2008, Commander Timothy Keating pointed out at a hearing that the proposed division of the Pacific Ocean had been proposed by the head of the People's Liberation Army. The US Pacific Command, Capt. James Fannell, was removed from his post after he spoke at a public seminar about the CCP invading the Senkaku Islands. (Related videos of Commander Keating and Captain Fannell are linked below)
At the 2002 Micronesian Presidential Summit, there was another ICT item on the agenda, Trans-Pacific Fiber Optic Cable*. It may have been classified in 2002. This is the U.S. military's project to lay submarine communication cables in response to North Korean ballistic missiles. The U.S. military has a Reagan interceptor missile base in Kwajalein, Marshall Islands, but it was only connected to satellite communications. Satellite communication has a delay of 0.5 seconds. The delay in information from Guam was fatal, and the cable became a necessity. The cable was military and civilian, and could be used by citizens of the Marshall Islands and the Federated States of Micronesia.
The cable, called HANTRU-1 (Hannon Armstrong Capital LLC and operator Truestone LLC), connected Kwajalein to Guam in 2010, with Majuro, the capital of the Marshall Islands, and Pohnpei, the capital of the Federated States of Micronesia, along the way. The cables are shared between the military and civilian sectors, but they are well separated.
In order to make the most of this once-in-a-lifetime opportunity, the FSM and the Marshall Islands have accelerated the momentum of reforming their telecommunications systems. Although it is essentially a domestic issue, the discussion has started as a common issue for the Micronesian region. I provided the concept of "universal service" to drive the policy discussions in each country.
As a result, the Federated States of Micronesia completed its National Information and Communications Policy in September 2012 with initiative of Hon. Francis Itimai, the Minister of Transporrtation and Communication. The SEA-US cable project was undertaken by Japan's NEC. The cable, called SEA-US cable, was laid by Japan's NEC, and connected Davao in the Philippines to Guam, Hawaii, and Hermosa Beach in California via Palau and Yap, in 2017.
The 15 billion USD Okinawa IT Charter, Japan's proposal for iDigital Divide support presented at the G8 summit in 2000, took many twists and turns, connecting the islands of Palau, Yap, Pohnpe, Chuuk, and Majuro to the world in gigabytes. This was partly due to the U.S. military's response to the threat of North Korean ballistic missiles, but I am convinced that it was also due to the discussion and articulation of the political will of the people of the islands, including President Nakamura and Chief Secretary Kuartei of Palau. This is one of the results of Micronesian regional cooperation.
*Trans-Pacific Fiber Optic Cable: The Presidents of the FSM and the RMI gave updates on the efforts of their respective countries to bring trans-oceanic fiber optic submarine cable transmission systems to their respective countries and to the region. Both Presidents indicated that they would include Palau in their future discussions with interested international partners. Palau expressed interest and appreciation for such efforts and indicated that they would, upon receiving a final determination on their FCC petition, take a more active role in this national and regional effort. Palau also indicated that a tentative proposal to initiate a fiber optic system from Guam to Yap and Palau was currently being reviewed by the Republic of Palau. Palau further indicated that any successful cable project in Palau would include consideration of Yap's needs for fiber optic cable.
(JOINT COMMUNIQUÉ OF THE SECOND MICRONESIAN PRESIDENTS' SUMMIT, 2002)