The Micronesia Maritime Security Project was launched by me alone in 2008.
Even Jiro Hanyu, who has no knowledge of the oceans and the Pacific islands, was aware that Micronesia was an important region for the security of the United States. When Professor Akio Watanabe and I advised him to talk to Australia about the project, he brushed it off, saying that Australia was not important. He said it was Masahiro Akiyama's advice. I was surprised at the level of understanding of Australia in Japan.
For a few decades Australia had provided surveillance boats to the Pacific Island Countries, including three Micronesian countries as part of the PPBP (Pacific Patrol Boat Program). Several Royal Australian Navy personnel were also dispatched to the Micronesian countries. In a sense, Australia was more aware than the United States that the North Pacific, as well as the South Pacific, was its responsibility.
As shown below, three ships were provided to the Federated States of Micronesia, and one each to the Marshall Islands and Palau. This information is out of date. Palau has just received Remeliik IIs.

(Federated States of Micronesia)
Date of provision / End of boat life / Name of Boat
Mar-1990 / 2020 / "Palikir
Nov-1990 / 2020 / "Micronesia"
May-1997 / 2027 / "Independence" (Republic of Marshall Islands)
(Republic of Marshall Islands)
Jun-1991 / 2021 / "Lomor" (Republic of Palau)
(Republic of Palau)
May-1996 / 2026 / "Pres. Remeliik
The reaction of the Australian government to Japan's move to protect the Micronesian oceans was overwhelming. I had friends in the Pacific who shared with me an email from the staff of SPC's marine project (who was an Australian). It was full of paranoid comments.
My visit to Canberra began to deal with strong opposition from the Australian government, from 2009.
The Australian government was moving to hand over the role to the Border Patrol - lawenforcement, with the navy saying that chasing fish was not the job of the military. Once when I had a meeting with the person in charge for transformation from RAN, officials from the Ministry of Foreign Affairs who had been informed of the meeting came in and they had a discussion for almost three to four hours. It was supposed to be a meeting for me from Japan, but I was out of the loop, and I was able to observe a very rare and valuable scene. I learned at that time that the Ministry of Foreign Affairs and the Ministry of Defence do not get along well in any country.
I still remember the words from the Australian Ambassador to the Federated States of Micronesia, a female ambassador circa 2008, so I'm sure I can find her name.

Yes, I found her, Ms Susan Cox
"Japan is going to support maritime surveillance? What are you talking about? Oh, I would like to suggest the idea of teaching Japanese language to Micronesian law enforcement to arrest Japanese fishing vessels."
I did not know that Japanese fishing boats had such a bad reputation. After learning about it for a while, I realized that it was a manifestation of Australia's anti-Japanese attitude and ignorance about fisheries.
And the timing was just too amazing.
Australia was considering supporting maritime law enforcement in those Pacific Island countries that were not improving, and the RAN had written to the Government saying that it wanted to stop chasing fish because it was not naval business.
Then Japan came in. The reaction of the Australian government of the anti-Japanese Rudd administration was not half bad. It was agreed at the PIF meeting, at once that the PPBP, which had been discussed for cancellation, would be continued in 2009.

The problem was that Japan, especially the Ministry of Land, Infrastructure, Transport and Tourism (MLIT) and the Coast Guard, who did not understand English, did not understand the situation.
During the meeting with RAN, they told us:
"We have strong reservations about Japan's participation."
I was shocked. The Japan Coast Guard and MLIT were at the table. Later, the report came around.
It said, "Australia has expressed reservations (In Japanese Yoyaku, it means make reservation).
At that point, I realized the limits of the Coast Guard's English ability, and my mind went blank.
On the Australian side, the Ministry of Foreign Affairs and the Ministry of Defence were not in sync at all.
At one meeting, the Australian Foreign Ministry mentioned a proposal by Dr. Anthony Bergin  and Dr. Sam Bateman of ASPI (The Australian Strategic Policy Institute), an Australian think tank, to establish a marine coordination center, but the Japan Coast Guard, which does not speak English, misunderstood it as a possibility for Japanese assistance. Since Dr. Bergin and I were on good terms, I told him that I would proceed with the misunderstanding. The Australian government initially ignored Dr. Bergin's proposal. This is the Palau Maritime Operations Center as we know it today. 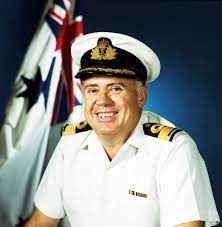 Again, the Japanese side does not know anything either. I contacted Dr. Russell Trood, then chairman of the Senate Standing Committees on Foreign Affairs Defence and Trade, and asked him if he would be interested in a Japan-U.S.-Australia maritime security study group, and he agreed. This study group continued for some time, and became the basis for the Micronesian maritime security cooperation between Japan, the United States, and Australia.

Ten years ago, it would have been impossible to imagine the current state of Australia-Japan relations. I would like to write once more about Australia's paranoiac reaction.
« ミクロネシア（７）- ６ ミクロネシア海洋… ミクロネシア（７）- ５ ミクロネシア海洋… »
プロフィール