"Somewhat disturbing news."
When I sent out the news that the five Micronesian nations (Palau, the Federated States of Micronesia, the Marshall Islands, Kiribati, and Nauru) were leaving the Pacific Islands Forum, I received a response from my former supervisor Prof. Akio Watanabe. I couldn't help but reply to him.
"In case you've forgotten, 22 years ago, in 1999, I made the Micronesian Regional Cooperation Framework Policy to supprt, with your guidance. Here are the results. We (with all due respect) made the history of Micronesia and the Pacific!"
There was no response from Prof. Watanabe after that. He may have thought I had lost my mind.
But it's true.
I was the one who spent five or six years developing the ODA for the USPNet (University of the South Pacific Distance education satellite network) upgrade project, the centerpiece project of the first Pacific Island Summit in 1997 which was hosted by the Japanese government. In the process, I became acutely aware of the countries of Micronesia, which are not members of the University of the South Pacific. (The Marshall Islands joined the USP around 1995.) I found a huge wall between the North-South Pacific throughout my experience in the Pacific islands and the US, Australia, i.e differences between the U.S. and British systems.  This difference is the absolutely incompatible social systems such as education, and the differences in values.
My second Master thesis under the supervision of Professor Watanabe was "Japan-U.S. Cooperation in Satellite Communications Policy for Pacific Island Countries." I summarized the history of satellite communication networks in the United States and the University of the South Pacific, and the issues they faced, while also included a proposal for communication development for the purpose of educational welfare in Micronesia.
On this basis, and with the guidance of Watanabe, I made a policy for supporting regional cooperation in Micronesia. At the same time Micronesian countries had just begun to move sub-regional movements around 2000. 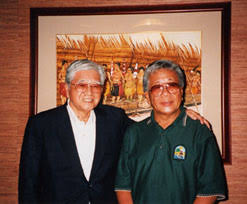 The late Setsuya Tabuchi with President Nakamura in Palau in 1999.
In 1999, when the General Assembly of the Pacific Islands Forum (then known as the South Pacific Forum) was held in Palau, I was in Palau with the late Hiroshi Mitsuzuka, a member of the House of Representatives, and the late Setsuya Tabuchi, former chairman of Nomura Securities Co. Palau is special place for these men who had memory of the war. It was just a coincidence that the date coincided with the Forum's general meeting. In fact, the original schedule was changed due to my surgery, because I was cordinating thier visit to Palau.
The chairman of the forum at that time was the President of the host country, Palau, the late Hon. Kuniwo Nakamura. President Nakamura was the one who took the "South" out of "South Pacific Forum", expressed his dissatisfaction with Australia and NZ, and took action.
(This is a long story about the creation of the regional framework for Micronesia)
« ミクロネシア（２）ヘレン／ジョンと戦っ… ミクロネシア（１）渡辺昭夫先生と私が作… »
プロフィール