The US military's expansion into the Indo-Pacific has been remarkable. This may be due to the military threat posed by China, which includes illegal fishing vessels and presence of the Little Blue Men- maritime militia. But there are plenty of other illegal operations.

U.S. Customs and Border Protection has issued an order to halt shipments at U.S. ports after finding credible evidence that the crew of the Chinese-operated longliner Hangton No. 112 had been subjected to conditions defined by international standards as forced labour. The fishing vessel was operated under the Fijian flag. Pacific island countries are surprisingly complicit in some aspects of illegal fishing.

However, on 6 August, an Australian ABC news report cast doubt on the above "credible evidence". It referred only to the "investigative report documenting abusive conditions in the Pacific fishing fleet released in December 2019 by Greenpeace Southeast Asia and the Indonesian Migrant Workers Union", to which the US referred, and not to the Fiji-based fishing company, which is the key to the case.

And the expert comments that the US's enforcement of illegal fishing is a result of regulations developed under the Obama administration. I have heard stories of overly strict US regulations that have weakened the US fishing industry.

Fijians, Koreans, Chinese and Indonesians are on board the fishing vessels that the US has imposed sanctions on. A representative of a fishing boat company in Fiji said there was a problem with an Indonesian fisherman in 2018, but it was resolved and he has returned to Indonesia. If there was a problem, he said, it was with a company in Indonesia that was contracted to recruit the fishermen. In addition, the sanctioned vessels had independent "observers" on board who would have reported any illegal activity.

HANGTON 112 is also a registered vessel with the WCPFC - The Western and Central Pacific Fisheries Commission. 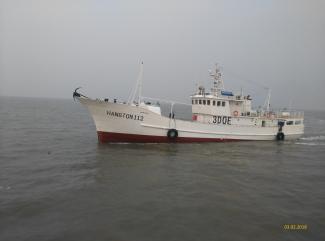 Illegal fishing promoted by the Nauru Agreement
There is also a backdrop in which Pacific island countries are creating reasons for pelagic vessels to take fish as cheaply as possible. They increased fishing licence fees. For the past 10 years, the Nauru Agreement has been the framework for a draconian price increase.

In 2012 the fee was US$5,000 and now it is over US$10,000 a day. Where will the fishermen get the money to pay for this? It costs money to run a fishing boat. In Japan, a country governed by the rule of law, it is not possible to reduce the costs of labour, insurance and fishing vessel management, and the Nauru Agreement will naturally have an impact on fish prices. In the case of Indonesia, however, it is possible to reduce labour costs in any way. And in the market, they can sell their fish at prices that Japanese fishing boats cannot compete with.

Fisheries industory, and illegal fishing, is infinitely more complex. Recently, I have been hearing a lot of questions, especially from Pacific Isalands people, about US enforcement of illegal fishing. At the very least, I hope that the US will not rely solely on the information provided by Sea Shepherd, Greenpeace, Pew and other less reputable civil society groups in the region.