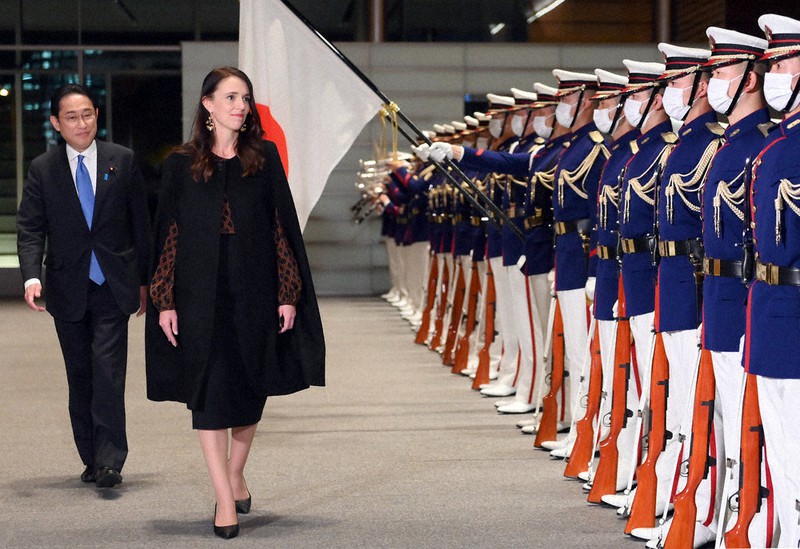 I knew that Prime Minister Ardern had visited Japan in April, but I did not expect to see she and Prime Minister Kishida issue a joint statement covering 26 items, focusing more on security and defense than on the economy, and especially on the legal framework for the reciprocal protection of classified information. More than two months have passed since then, and I am shocked to learn this for the first time.

But there is a reason for my misunderstanding: "Oh, here she comes again to sell kiwi and cheese. The kiwi dance performed with " Moon over the Deserted Castle" was so surreal that it became the talk of the town.

This is the greatest day of my life pic.twitter.com/KIp4bP7h8u

Mr. Cooke, a journalist who accompanied Ardern to the event. His tweet has been retweeted more than 40,000 times, quoted more than 5,000 times, and liked nearly 170,000 times. Although it was not arranged by the host, the Japanese government, that it was arranged by a New Zealand kiwi company called Zespri. But who chose Japanese music?

Mr. Cooke has written the following very interesting article, yet it has been retweeted 3 times, quoted 15 times, and has only 43 likes. PM Ardern visited Singapore before Japan, but there was no significant movement and he didn't write an article about it, but Japan will change the relationship 180 degrees.
Which means that New Zealand, which has always been focused on the Chinese market, will change.

A 26-point summit joint statement was issued on eight themes.

The key is in item 4 regarding intelligence and classified information.

Japan and New Zealand are key partners in advancing and protecting peace and security in the Indo-Pacific. Confirming the importance of further deepening the Strategic Cooperative Partnership, the two leaders shared their commitment to enhancing information sharing between the two countries. In this context, the two leaders decided to commence negotiations on an agreement to provide a legal framework for the reciprocal protection of classified information exchanged between the Governments and enable more seamless sharing of such classified information.

New Zealand is a country of open for markets and immigrants, and tremendous Chinese penetration. The Chinese mafia is also in the country. Chinese who have gained citizenship in New Zealand are involved in casino crime in Australia. Japanese criminal organizations and cyber crimes may also be taking place. I can think of many reasons why Japan, which is not in the Five Eyes, would share classified information with New Zealand.

Now, as for kiwi dancing, a variety of kiwi called Kiwigold, which is less acidic, has been developed in New Zealand and is grown in Japan, China etc. after paying . However, the problem is that it is being grown illegally in China. It is impossible to know the whole picture. Therefore, kiwi dance is not related to intelligence, but kiwi fruit is related to economic security.

One more extra point: this kiwi, a native of China, was first introduced to New Zealand in 1904 when Mary Isabel Fraser, principal of the Wanganui Girls' College, brought seeds to New Zealand while visiting a mission school in China.