Heart of Darkness of Island Society

The murder of Ms Rachelle Bergeron has occupied my mind since the 15th October when the news showed up on SNS. In my 30 years experience of working in the Pacific Islands, I have always felt this kind of fear in island societies. The fear is at the heart of darkness in small societies. It is something that is hardly published in the local public media but it is something that communicated to foreigners like me are outside that society.

I have been quite aware of corruption and crime which is basically managed by leaders of Pacific Island Countries. I learnt a lot, especially since 2008 when I launched the maritime security project in Micronesia.

Because of the Free Association many young American lawyers have been employed by local governments in Micronesian countries. I believe that they are of the same age as Ms Bergeron.  I witnessed some young American Lawyers leaving the  islands because of conflict with the employed government who basically want to protect local leaders who promoted human trafficking, drugs, money laundering and other crimes. If these lawyers choose to stay and stand to fight these crimes, they may be murdered as Ms Bergeron was. The same week of murder of Ms Bergeron, the car belonging to the head of the Narcotics Enforcement Agency was burnt in Palau. His boat was also burned last year as well.

A few years ago, I have been asked by the Hon Kuniwo Nakamura of Palau to protect kids from drugs. I had been asking myself – why did he ask me to do that? Because the criminals are Palauan. They could be ones friends or relatives of Hon Nakamura? Over the last ten years, I and my friends, also our Emperor and Empress, and Dr Takasu have been supporting the organisation 'Judo Kids" in Palau.  I am not brave enough to stand against these crimes as Ms Bergeron has done, but I do take a different way. Yet for me her death is too high a price to pay. 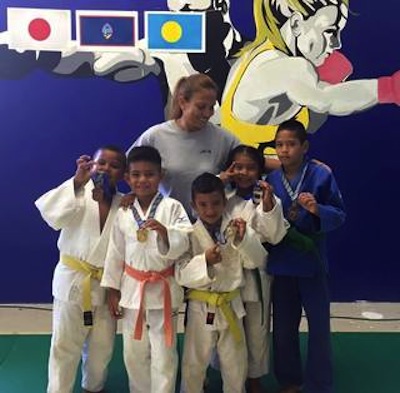 Free association and Security for whom?

Since I have been observing the US attitude towards Micronesia since 1990 just after the end of the Cold War, I support for the current Trump administration's re-commitment towards this region.  I wish the murder of Ms Rachelle Bergeron may bring an awareness and a new perspectives for the US people and government. The Pacific Islands are not paradise or a safe place. The image of the Pacific Islands seen by many in developed countries is still the same as that portrayed in the 18th Century by Bougainville during his short visit to the Tahiti. Such an image never was. One of the causes that Ms Bergeron was fighting for was the human rights of children and women. In Yap 12 years girls were forced into prostitute. So I would like to ask why the US government arranged a Free Association with these countries? Yes it was negotiated during the Cold War. The Free Association was basically to protect the US security interests,  not the interests of 12 year old girls of Yap.

Human rights of children and women in Yap and Palau is not our i.e. Japan and US business? Most of human rights abuse may connect all kinds of crimes and which make society more corrupted and invite more crimes and shady business, such as Chinese investment for Resort & Casino project.

Ms Rachelle Bergeron told us that security and human rights of islands children and women are our business and our security. This should be another perspective of Free and Open Indo-Pacific strategy as Japan-US cooperation.

Rieko Hayakawa is working for the Pacific since 1988. Hayakawa holds a PhD from the University of Otago in New Zealand. Dr. Hayakawa has managed the Pacific Islands Fund of the Sasakawa Peace Foundation since 1991 to 2017, and made the USPNet as Japanese ODA project, launched the Micronesia Maritime Security Project and submitt many pocilies related to the Pacific such as Indo-Pacific strategy and maritime security towards Abe administration. She is currently researching the International Ocean Law at Doshisha University in Kyoto, Japan.