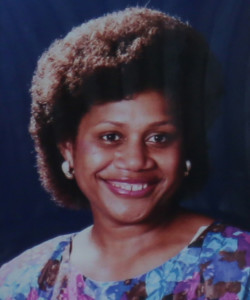 I first met Nina Ratulele around 1992 or 1993, just after I joined the Sasakawa Peace Foundation and was in charge of the Pacific Island Nations Fund (SPINF).

SPINF was established in 1989 with about 30 million USD as an endowment.  However, senior officers who were initially in charge of this new fund had totally collapsed its establishment. My mission was to re-establish SPINF from the making of a mission to creating projects.

One of the projects was “Journalists invitation”. In early 90s, it was totally impossible to make contact with the local media in the Pacific without the Internet. During a business trip to Fiji, I was invited to some cocktail reception. A European man talked to me “You should support PINA; Where do you stay? Which room?” I stupidly told my hotel name and room number. The man was the late Mr Robert Keith-Reid, publisher of “Islands Business” (which I learnt later).  Fortunately a young “lady” called my room in next day. It was Nina Ratulele.

I studied what is PINA – the Pacific Islands News Association, which is one of the very important legacies of the United States. A US NGO called 'Asia Society' nurtured the establishment of the regional media organization, however, they left before the baby could walk by herself. The Cold War had ended. I then became the temporary mother along with Nina Ratulele for this regional media organization.  In the 90s, SPINF funded more than one hundreds journalists from Pacific to visit Japan.

At the beginning I had difficulties in organizing programs in Japan. Most of the Pacific Islands Journalists did not write any articles arising from their visits and interviews with Japanese companies, business people etc. I then changed the location of these arranged visits from Tokyo to the remote islands of Okinawa, such as the islands of Yaeyama and Miyako.  These islands have the same issues as PICs, so the Pacific Journalists could write stories on island custom, history and business, making comparisons with their home island.

Nina was the perfect partner as organizer for this project. She contacted journalists in the region on behalf of me, looked after their flights, visa arrangements, etc. She had a great sense of cultural exchange. Our other counterpart was the Yaeyama/Miyako Islands Journalist Club, always appreciated her painstaking coordination skills.

At that time I did not really recognize that travelling to foreign countries was a quite rare opportunity for Pacific media, especially the private media which always having financial and human resource limitations. Nina came to Japan many times with the PICs Journalists as a SPINF invitee. I needed her to organize the PICs Journalists as they were not the easiest to coordinate, with some disappearing at the airport, or becoming heavily drunk at the welcome reception. Nina knew how to deal with them.

With her success there developed jealousy from some PICs journalists.  I heard many rumors about Nina, such as her not being a journalists, or that she manipulated grants etc. She finally stepped down from being PINA's Secretary. I worked with her successor at PINA, but none of them worked as well as Nina did. I believed that Nina had a great partner, Peter Lomas, who may have supported her in many ways.

I visited Fiji in 2013 and spent a few days with Nina. We talked a lot. I never imagined that was the last time to see her. Nina and I really had nurtured PINA in the 90s.

Nina of PINA - She made a great history and laid the foundations for the regional media of the Pacific Islands.